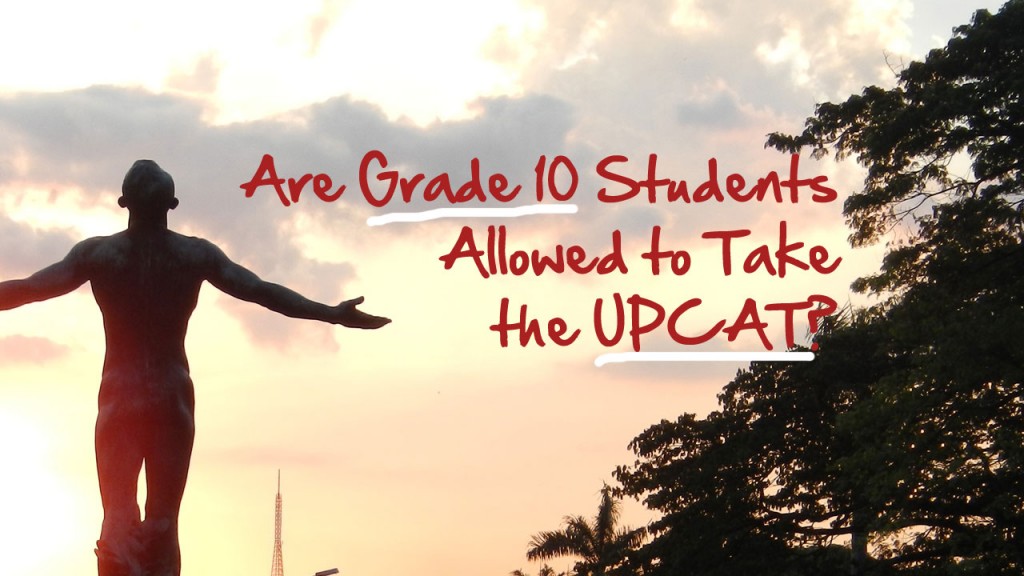 We have been asked by so many parent and student this question: Can Grade 10 students take the UPCAT this year?

Before the implementation of the K to 12 curriculum, the procedure for application was simple to understand. Those who want to take the UPCAT should belong to any of the following:

With the K to 12 program now being implemented by DepEd, parents, students and school administrators are confused whether Grade 10 students can take the UPCAT.

Now we ask the controversial question: Are Grade 10 students allowed to take the UPCAT this year?

“Only those, mostly coming from private high schools with accelerated programs,” said University of the Philippines president Alfredo Pascual last Saturday, July 18, during an event with some of the university’s alumni.


Can Grade 10 students take the UPCAT this year?

“Only those, mostly coming from private high schools with accelerated programs”Alfredo Pascual, UP President

High schools with accelerated programs are those school that were able to secure a permit from CHED to let their students graduate by 2016. These schools will in a way maintain their 4-year high school but implement the accelerated K to 12 program.

Last Friday, the Commission on Education issued a memo saying that those who can enroll in college in 2016 should graduate from high school. These high schools got permits from CHED to start K to 12 earlier than the mandated year. Some of these schools also served as pilot testers of the Kto 12 curriculum.

The list of schools in the memo are listed at the bottom of this page. There are 391 high schools listed as of writing.

In addition, UP Vice President for Public Affairs Prospero de Vera gave a statement that the UPCAT taker has to have a certification that he or she is graduating this 2016.

Pascual also said that UP estimates only about 20,000 will take the UPCAT in 2015. This is due to the drastic decrease in number of high school students expected to graduate this year. This number pales in comparison to the 87,000 who took the UPCAT last year.